(Motorsport-Total.com) – The news comes as a surprise: Honda will end its Formula 1 project at the end of the 2021 season and again say goodbye to the premier class. The Japanese announced this on Friday at a press conference. Honda justified this step with a changed focus on the automotive industry, in which they want to be CO2-neutral by 2050.

Honda will say goodbye to Formula 1 after the 2021 season


The 2021 season will be contested together with Red Bull and AlphaTauri as engine manufacturers, after which the Bulls will have to look for a new drive partner. The engine manufacturer only re-entered Formula 1 in 2015 and had three fruitless years with McLaren before turning to the Red Bull family.

According to Takahiro Tachigo, President of Honda Motor Company, the decision to exit was not made until the end of September. “We have decided that we want to accelerate our efforts in the area of ​​sustainable technologies, so we need to focus on carbon-free technologies,” says Tachigo.

“In order to achieve this goal, Honda must change its research and development in the field of future drive technologies,” the president continued.

At Red Bull, this decision is taken with composure: “As a team, we understand how difficult it was for the Honda Motor Company to make the decision to withdraw from Formula 1 after the 2021 season,” says team boss Christian Horner. “The changing focus in the automotive industry has led to Honda’s decision to shift resources. We understand and respect the background.”

“This decision naturally poses challenges for us as a team, but we were already in this situation. And since we are well positioned, we are equipped to react effectively, as we have already proven in the past,” Horner continued. “We thank everyone at Honda for their extraordinary efforts and determination.”

The first factory Honda was already on a Formula 1 racetrack in 1964. The car will initially be driven by the American Ronny Bucknum.


Red Bull’s motorsport consultant Helmut Marko also shares the same line: “Both of our racing teams have built strong and successful relationships with the Honda Motor Company over the past few seasons. We understand Honda’s decision and respect the direction they are taking in the face of the new challenges, who are represented in the automotive industry. “

For the rest of the time together, the goal is to fight for victories together and to be a title contender. “In addition, we will work with our teams to find the best possible power unit solutions for 2022 and beyond.” 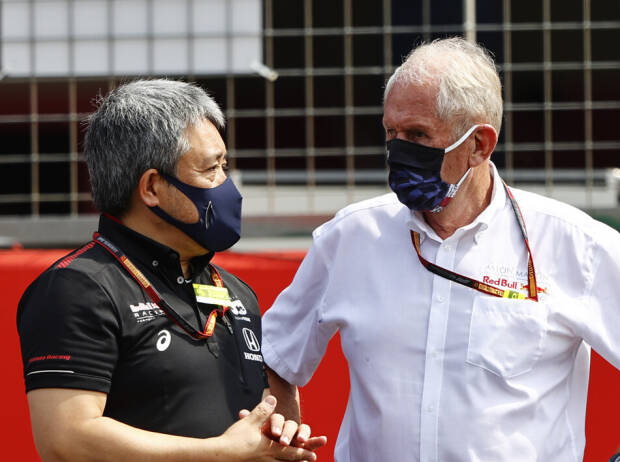 Red Bull regrets the exit of its engine partner


“We are looking forward to this new era full of innovation, development and success. As a group, we are now taking the time we have to further evaluate the situation and find the most competitive drive solution for 2022 and beyond,” said the team boss.

Honda has clinched five race wins since its comeback, four with Max Verstappen at Red Bull and one with Pierre Gasly at AlphaTauri. This makes the Japanese the only manufacturer who was able to win with more than one team in the turbo era.

“We initially had problems with performance and reliability. But thanks to the efforts of the entire Honda group, including know-how from our research in the field of jet engines and knowledge of serial production to improve efficiency, we have succeeded in our Significantly improve competitiveness, “says President Tachigo.

The Japanese continues: “AlphaTauri, then still Toro Rosso, believed in our potential and signed a contract with us. Since then, they have supported Honda, and since then we have become better together.”

In addition to Red Bull, AlphaTauri also has to look for a new engine partner. With Honda’s exit, however, the selection has become smaller: According to the current status, there are only three drive manufacturers with Mercedes, Ferrari and Renault in 2021.

Franz Tost regrets Aus: “One of the best engines”

“It is a shame that Honda has decided to end its involvement in Formula 1, because the performance of its drive train has improved consistently and quickly, so that it became one of the best engines on the grid in a very short time,” says AlphaTauri- Team boss Franz Tost.


“We respect Honda’s decision to focus on environmental initiatives and strive for CO2 neutrality. All of us at AlphaTauri wish you every success and a successful future,” said the Austrian.

“We would like to thank Honda for a fruitful cooperation and emphasize that we have enjoyed every day working together. It will not be easy to find a partner like Honda, but we will of course now try to find a solution for the period after 2022 to find.”